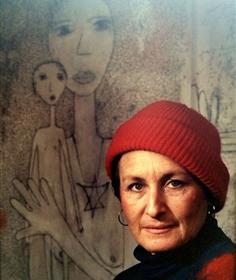 When I was about six years old a Library Lady in the South East Bronx  chose me to be in her show.   I was to sing  "alla wetta, junti  alla wetta , alla wetta,  junta pluma rey”.    She taught me the words (all in French, which was Greek to me)  and showed me the facial expressions and movements to use.   And she made me a blue crepe paper costume.   The audience was a bunch of kids who sat on the floor in a circle.   I was terrified, but I did it,  and afterward the Library Lady treated me to my very first ice cream soda (with whipped  cream on top)!   Many years later in my play PUSHING THE  D TRAIN BACK TO BROOKLYN,   a little girl in Act One and then a woman in Act Three sing this very same  song to an imaginary audience.    The place:  an imaginary library.   It seems I  hadn’t  traveled far,  but over the years and along the way,  I have been grateful for these  recollections of the past which have inspired  the process of creating  the pages in this book.    The journey has filled me with much joy,  which is what I wish for you as you make  Essie’s  monologues your very own.